Why SSC JE Should be an Important Exam for Engineers?

The SSC JE stands for Selection Staff Commission Junior Engineer. The Selection Staff commission conducts the JE exam every year to recruit eligible candidates for the post of the Junior Engineers(Mechanical, Civil, Electrical, Quantity surveying and Contracts) in various departments and organizations of the Government of India.

Importance of SSC JE for engineers

SSC provides a golden opportunity for engineers to work in government organizations. To enjoy the perks of working in various government departments, the aspiring candidates are required to appear for SSC JE exam, which is usually conducted in the month of September. The candidates recruited under SSC JE will be posted under “Group B Non-Gazetted” category. After the 7th Pay Commission, there has been a hike in the SSC JE pay scale. In this article, the perks, work profile, allowance and promotion on being recruited as the junior engineer in government organizations have been discussed. 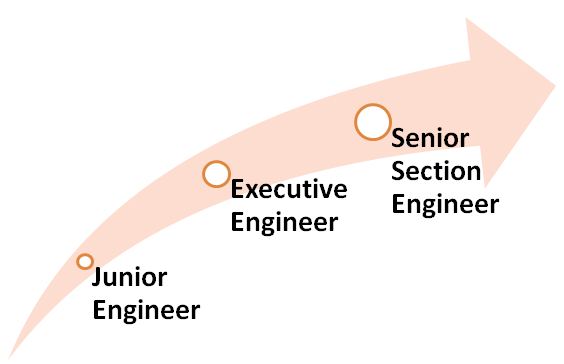 The Junior Engineers are recruited in various departments of the government organizations. Before getting into the details of the pay scale, it is important for aspiring candidates to be well aware of the departments they will be working in. The following is the list of the departments.

The Junior Engineer salary after the 7th Pay Commission, including the allowances, is as follows:

Before applying for the exam, the aspiring candidates should be well aware of the work profile.

The roles and responsibilities of the recruited candidates will be as follows:

Initially, Junior Engineers are required to supervise the work, which will help them to understand the functions of the organization.

Planning of the flagship projects is carried out in the respective department. Junior Engineers are responsible for designing such projects.

The Junior Engineers are assigned with the work to look after the stocks. The engineer is also responsible for passing the bills to the contractors.

The Junior Engineers will be appointed under different sections. They will be heading such sections. In case they are dealing with particular projects, then they are required to report their seniors on a daily basis.

Based on the performance the Junior Engineers will receive promotion. SSCJuinor Engineer promotion details are as follows.

Besides all the benefits, the most relaxing news regarding the SSC JE recruitment is that the candidate doesn’t have to sit for an interview. The selection process is conducted in two phases. Paper 1 is usually of 200 marks and Paper 2 is of 300 marks. Both paper 1 and 2 are Multiple Choice Questions 0.25 mark gets deducted on every wrong answer. According to the recent pattern, candidates appearing for the post of JE (Civil) and  JE(quantity surveying and contracts) should attempt Part A (Civil and structural) of paper l & ll.

Apart from the perks and allowances, the government employee receives a lot of respect in society. The best thing about the government job is the work schedule which helps to maintain the work-life balance. The aspiring candidates should consider appearing for this exam to get hold of such a lucrative career. SSC JE provides this golden opportunity to join the prestigious government organization on the basis of the rank secured in the SSC JE exam. The aspirants should visit the page regularly to be updated regarding the upcoming SSC JE exam.