Simone Biles Has Two New Gymnastics Skills Named After Her

It’s no surprise that Biles has done it again by stepping into a territory all on her own. Ever since her first gold medal in the 2013 World Artistic Gymnastics Championships in Antwerp, she’s truly been a trailblazer and it goes to show how she continues to dominate the scene. Speaking of which, she’s recently set a new benchmark at the 2019 US Gymnastics Championships in August. She’s the first gymnast to land a triple-twisting, double somersault (triple-double) on the floor, and a double-double on the beam in a competition. Not to mention, she won her sixth all-around gold medal (a streak that has gone on for six years). Also, she’s the first U.S. gymnast to win medals in every event. Due to these record breaking performances and high level maneuvers, people are considering Biles to be the greatest gymnast of all-time.  With that being said, here’s why she’s close to getting these moves named after her. 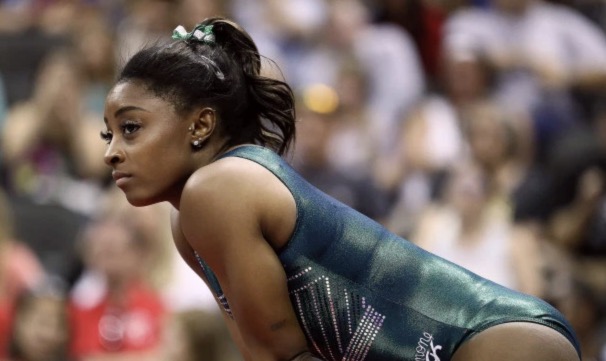 The criteria for getting a skill named after you (per the FIG Women’s Artistic Gymnastics Code of Points) involves a few factors:

You have to perform the skill without falling at a World Championships, an Olympic Games, or a Youth Olympic Games.

Additionally, you need to be the only one to correctly land it for the first time.

If there’s someone else landing the skill in the competitions, the element won’t be added to the FIG Code of Points.

Now, in terms of scoring, it’s a different ballgame. In gymnastics, each skill starts off with a ranking of A, which is one-tenth of a point. In order for a skill to be added to the FIG Code of Points, the difficulty must be at least a C, which is equal to three-tenths of a point. The first skill that was named after Biles was a double layout with a half twist on the floor. It has a difficulty ranking of G. While Biles added a front layout to the move in the 2019 GK US Classic, it’s just that – an add-on. Anyone that adds to a new skill already in the FIG Code of Points will be rewarded with bonus tenths.

This leads back to Biles latest new skill introduced at the US Gymnastics Championships. Prior to a new skill being added to the FIG Code of Points, it has to be assigned a value for scoring in competition. This is the reason why the triple-double was given a score amount. According to Cheryl Hamilton (judge of the 2012 and 2016 Olympics with international qualifications), she believes that the difficulty of that maneuver is a J.  Hamilton is chair of the Women’s National Technical Committee. She along with chair of the International Elite Committee Kelli Hill and USA Gymnastics’s representative to the FIG Women’s Technical Committee Tatiana Perskaya, have decided to give the value of the skill a J. The skill is so difficult that Hamilton believed that it deserved to get that high rating.

For everything to clear, it needs to be submitted to the FIG Technical Committee at the 2019 World Championships if the skill is done correctly. An official value will be set and it’ll be called the Biles II, aptly named after Simone. Hamilton also says that the double-double performed on the beam could also be named after Biles as well if she lands it in the competition.

While Biles appreciates having a move named after her, she still prefers to call the skill by its traditional name. When the Biles I was created in 2015, she stated “That’s really cool to have something named after me and have it stay in the history of gymnastics, but it’s kind of weird because every time I do it, I say, ‘Oh, I’m gonna do a double lay half out.’ I never say, ‘Oh, I’m gonna go do The Biles.’”

It’s an exciting time for gymnastics as the bar is constantly being raised. If you haven’t caught the recent historic performances of Biles, you can check them right here:

With the 2019 Worlds in October, there’s a lot to look forward to in competition. It’ll be interesting to see how Biles adds a few more notches to her belt. It’ll certainly be something to remember for things to come. Who knows? Maybe there will be a new spark to up the ante in skills in the near future. It’ll be quite the spectacle come October to see what happens with the new element.