IMD has released an update on monsoon that there will be light to moderate rain with isolated heavy falls very likely over southern peninsular India during the next 5 days and over Maharastra during the next 2 days.

The India Meteorological Department (IMD) said that a cyclonic circulation lies over the north Andaman Sea & neighborhood and extends up to the mid-tropospheric level. Under its influence, a low-pressure area is very likely to form over the same region during the next 36 hours. It is likely to become more marked and move west northwestwards towards south Odisha-north Andhra Pradesh coasts during subsequent 4-5 days. Under its influence; Light to moderate rainfall at most places with isolated thunderstorms (wind speed 40-50 kmph gusting to 60 km) and heavy to very heavy falls very likely over Andaman & Nicobar Islands during the next 5 days. 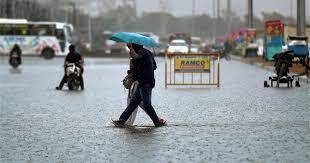