IMD predicts ‘very heavy ‘ rainfall in the next 24 hours

IMD records that there will be heavy to very heavy rainfall in certain parts of Tamil Nadu in the next 24 hours and a widespread, moderated rainfall will be there in certain regions of TamilNadu for the next 5 consecutive days has been said by the India Meteorological Department (IMD) said on Wednesday. The southern states have been receiving incessant rains since the beginning of November. 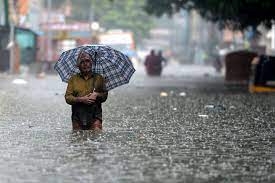 The areas which are recorded to be getting heavy rainfall are as follows, Heavy to very heavy rains were likely in some areas in Ramanathapuram and Nagapattinam districts of Tamil Nadu in the next 24 hours, the regional weather office in Tamil Nadu.

Fishermen are not advised to go fishing in these regions, as IMD has released an orange alert for Tamil Nadu for November 25 and 26.