Shaakuntalam is an upcoming Telugu-language historical film written and directed by Gunasekhar. It is produced by Neelima Guna under Gunaa Teamworks and distributed by Sri Venkateswara Creations. The film based on Kalidasa’s 4th century play “Abhigyanam Shakuntalam” Shakuntala which tells the story of the legendary princess Shakuntala and king Dushyanta. 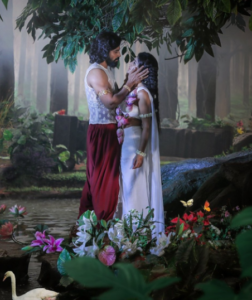 In the latest trailer for Shaakuntalam, the young daughter of Allu Arjun, is all set for her acting debut as Prince Bharata riding a lion in this historical film. Her adorable face will make you want to see more of her. 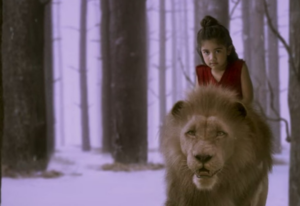 In an Interview with Pushpa actor Allu Arjun on his daughter’s acting debut, he said “I don’t know how to react till I watch her on-screen. I have seen the rushes on the monitor, but till you watch the whole film on-screen with the music and dubbing and stuff then I have to see how I feel. But it is cute as of now, definitely, it is very cute to see your child on the screen. I mean, it’s cuter to me because she’s my own child. But I hope people can relate to that cuteness”.

Also Shaakuntalam actor Samantha said, “”She was born to be a rockstar. Anything I say will just be an understatement of what that little girl has done. She was confident of herself despite there being 200-300 people on the set. She got her takes right on the first go. She speaks Telugu just so amazingly. She was born to be a superstar and I’m so happy that she made her debut with me because, many years down the line, she is going to rock this industry. Once you see the film, you’ll completely agree with me.”

The historical movie was shot on various location at Annapurna Studios, Ramoji Film City, Ananthagiri Hills, Gandhipet Lake. Also in the Northern part of India – parts of Kashmir and bank of Himalayas. Shaakuntalam will hit the big screen on 17 Feb 2023.

Meanwhile, you can watch the official trailer of Shaakuntalam which is going viral in OTT platform.