The government of India take a decision over flex-fuel engines in the next 8-10 days. As it is considering making these engines mandatory for the automobile industry. By Union minister Nitin Gadkari said on Sunday. While asserting that the move will help farmers and boost the Indian economy.

Addressing Rotary District Conference 2020-21 virtually. Gadkari said that the price of alternative fuel ethanol is ₹60-62 per liter. While petrol costs more than ₹100 per liter in many parts of the country. So by using ethanol Indians will save ₹30-35 per liter in fuel cost.

Nitin Gadkari Said: “I am transport minister, I am going to issue an order to the industry. That only petrol engines will not be there. There will be flex-fuel engines and choice for the people that they can use 100% crude oil or 100 per ethanol”.

Going to take this decision in 8-10 days. Will make it the mandatory for automobile industry. The Road Transport and Highways Minister mentioned that automobile makers are producing flex-fuel engines in Brazil, Canada and the US providing an alternative to customers to use 100% petrol or 100% bio-ethanol.

Recently, Prime Minister Narendra Modi said the target date for achieving 20 per cent ethanol-blending with petrol. It has been advanced by five years to 2025 to cut pollution and reduce import dependence. The government last year had set a target of reaching 10 per cent ethanol blending in petrol by 2022 and 20 per cent doping by 2030.

Currently, about 8.5 per cent ethanol is mixed with petrol as against 1-1.5 per cent in 2014. Gadkari said adding ethanol procurement has risen from 38 crore liters to 320 crore liters. And also said that ethanol is a better fuel than petrol. Also import substitute, cost effective, pollution-free and indigenous. Making flex-fuel engines mandatory is going to boost the Indian economy. Because we are a corn surplus, we are a sugar surplus, and a wheat surplus country. We don’t have places to stock all these food grains. 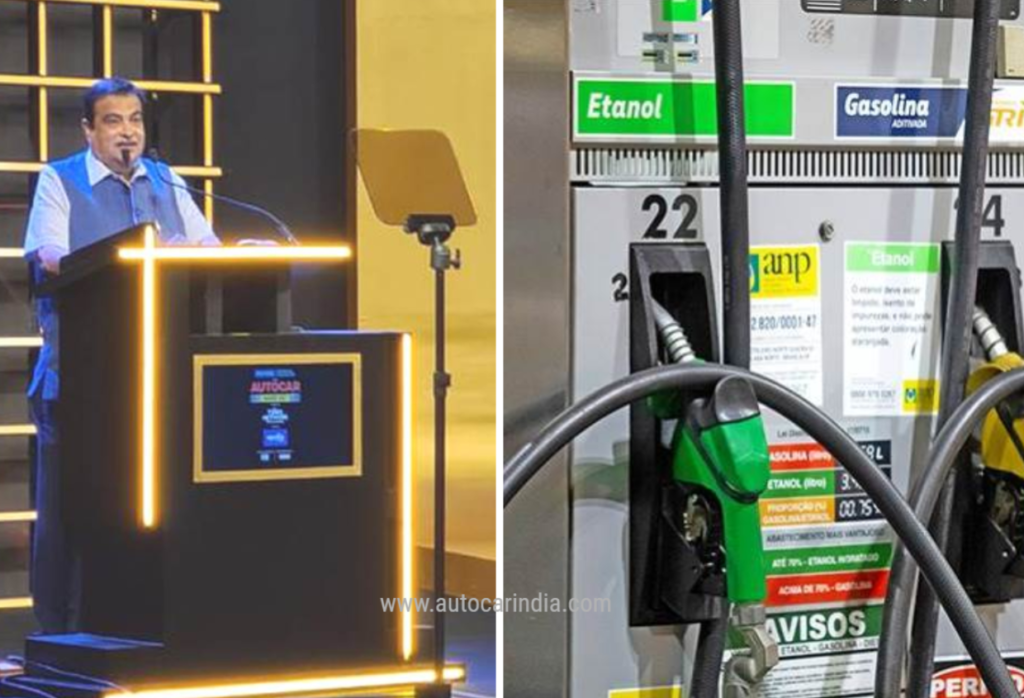 Noting that the surplus of food grains is creating problems. He said, “Our minimum support prices (MSP) of crops is higher than international prices and domestic market prices. So, the government has taken the decision that you can make ethanol by using food grain and sugarcane juice. “Petrol price in the national capital crossed ₹97 a liter and diesel neared ₹88 after fuel prices were raised yet again”.

The hike on Sunday was the 27th increase in prices since May 4, when state-owned oil firms ended a 18-day hiatus in rate revision they observed during assembly elections in states like West Bengal. In 27 hikes, petrol price has risen by ₹6.82 per litre and diesel by ₹7.24 a liter International oil prices have firmed up in recent weeks in anticipation of demand recovery following the rollout of vaccination programme by various countries. Also, the rupee has weakened against the US dollar, making imports costlier.